The standard posts for forums system allows you to create moderated or unmoderated, managable discussions. These forums can be extended in several ways:

In this page we'll looks at customising the forums using ther first two of these to create a forum that allows users to upload files and images into their discussion.

To customises a forum you need to start with a forum. Create one as normal and record its posttype ID for later. At the same time create a page to display the as yet un customised forum.

Creating the folder for uploads

We start by creating a folder in the asset tree at a suitable location. The folder rights on this should be checked to ensure that front end users can administer it this will allow them to upload into it. When created record its shortcutID as its needed later

We need to create a form that will allow users to upload files to the system. This is done via the standard Sitekit CMS form builder. As a bare minimum this needs to take in the following

The form will collect this information however it needs passed on to the createpost.aspx web service so the fields must have the correct naming convention as shown in the brackets.  The screen shot below shows the form builder interface for the one we've built. We've used a hidden field for peopleID and populated it with the ###:peopleid### magic word. The posttypeID will be sent directly in the web service as shown later 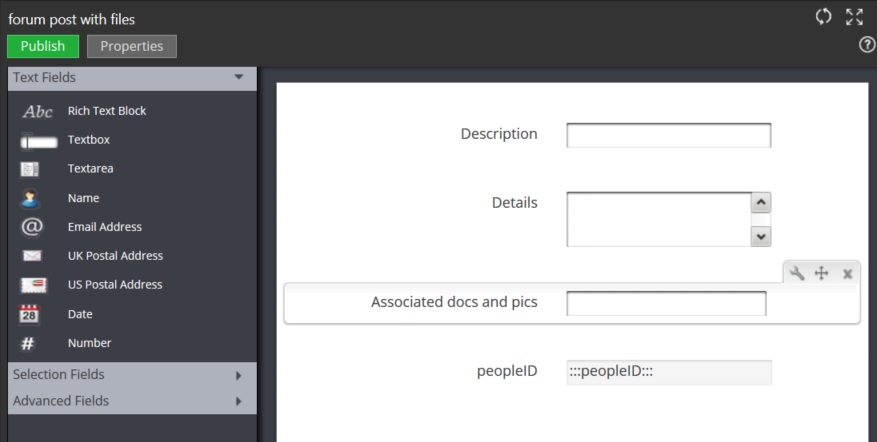 We then edit the relevant forms properties adding in the URL ot the external form submission. As you can see we've also edited the submit button text and the message after submission to make them more meaningful in the context of a forum 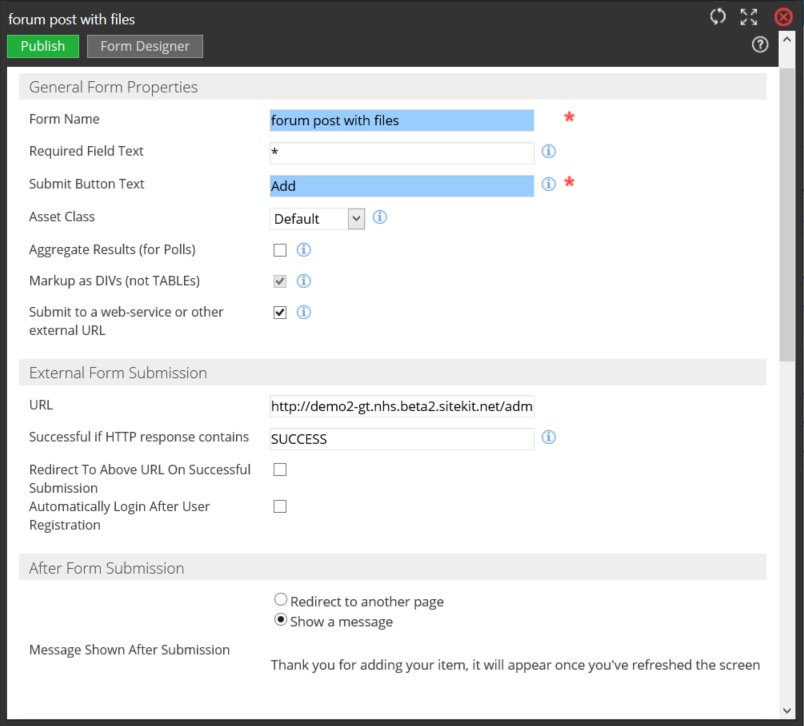 Hooking up the web service

The URL for the web service to submit is shown below

As you can see the postypeID and the foldershortcut are hardcoded in. We've also added an  active=1 argument which allows users to insert items without approval. The fields from a submitted forms are appended onto this string and then posted to the webservice to create the new discussion.

The final stage is to create a snippet that will render as the form as we'll use this to embed into the XSL. The syntax is from the guide and is shown below

If you're struggling to get things working you can test at eveny stage of the way and gradually build up the complexity, a good approach is as follows

The default XSLs for discussion are shown below.

These should be copied into a local file folder in the asset tree, and then the forum page should be edited to reference the new XSL location. In this example we'll only customise the first of these XSLs.

Open up the relevant local XSL and replace the standard form block with the snipplet shown, at the same time add a new column to display the upload. Append 'skdebug=1' to the forum page URL and then view source to see what the raw XML is that you're trying to transform. We use Xray architag for this. Alternatively view the XML by making the correct call to the searchpost web service. The correct URL for this would be like this, where ID is the relevant posttypeID

The example above should produce the following. In this case we've left the discussion the same and only modified the initial list, changing the form to allow uploads and adding the uploads to the display. 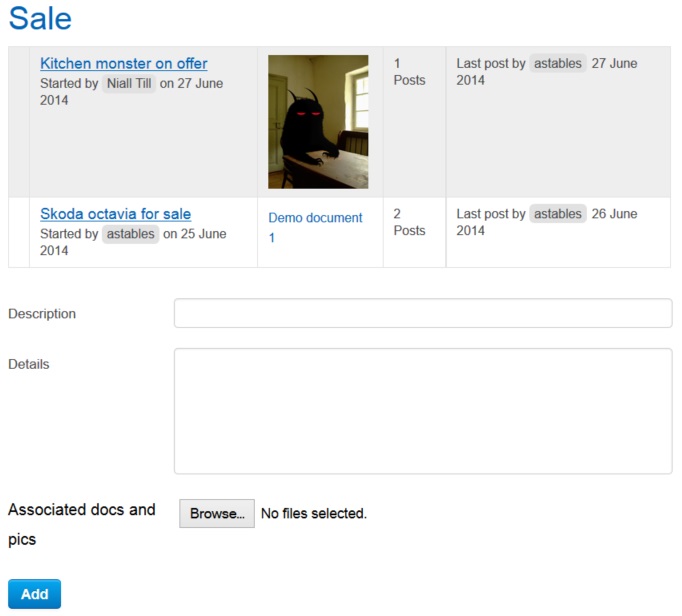 The forum could be further customised to display uploads on the discussion secton or even to allow uploading from discussion responses. similarly there are argument for createpost that prevent file overwriting in folders o these could be used to police responses. The forms could be extend with more custom post fields and also to allow multiple uploads on a single post. The display could be totally changed via CSS.

A note on security

It is possible to include a front end rich text editor (RTE) for form posts. Both the RTE and its input need sanitised to an extent to maintain security. The RTE to has no option for inputting image or link buttons. There is a setting to enable posting of html into posts. Front-end values inserted into posts are made safe by escaping potentially damaging tags. Escaping is done by replacing '<' and '>' with '&lt;' or '&gt;'. If html-posting is enabled, only critical tags are escaped that are potentially exploitable for injection but if html-posting is disabled, then all tags are escaped. When creating/editing posts in admin, no tags are escaped and posts that have restricted markup added in admin should still be rendered front-end. These changes were added as security enhancements in 11.0 with reference this article and advice from Microsoft

This article was last updated on 25 January 2017. Did you find it helpful?