The script manager, introduced in Sitekit CMS 10.2, provides an area in admin where you can order edit and apply your scripts and their associated CSS to your site. As third party scripts are increasingly used in modern sites to provide content editors, slide-shows, interface effects and analytics there is a requirement to prevent script interference and duplication, reduce page size and so to increase page speed. It allows you to do the following:

In this page we'll go over the admin interface for the script manager accessed under 'Build > Scripts'. When you first enter this section it will already be populated with any scripts and CSS blocks your site currently uses for specific Sitekit functionality (related to forums, and forms etc) however it is a good idea to see if your site needs more specific scripts added to the manager to prevent conflicts, this example shows you how. It also includes the site wide welcomestyle.aspx CSS reference (10.4)

The following are the cardinal rules of script management usage and need to be applied to get the maximum advantage from it. Existing sites are likely to need conversion to the new method if script clashes occur.

From now on, all script includes for a site should be done by putting the above magic word or its variant into HeadSectionHTML Variable-Block, rather than referencing the script directly unless a script has limited scope. If an included script is only needed in a very small scope then the include statement can be placed immediately before it is used. e.g. say in a body block on one specific page, you wish to use a bit of JQuery script then you can do the following in that body block:

The table has five columns and allows you to Add (at the bottom) Edit, Delete and View all the scripts in use in your site. It also allows you to drag and drop the scripts, changing their order of execution on the page. This is important because web pages parse from top to bottom so some scripts need to be executed in the correct order.

Each of the table entries can be edited or new ones added at the bottom and then dragged to the correct location. As you can see the 'position' column reflects a typical top to bottom page render. When you edit an existing script you see the following.

Going through each of these in turn:

This allows you to create or delete existing groups, you should group things together that belong to the same plugin but not scripts that belong to other plugins.

If a plugin or framework makes a reference to a script belonging to other plugins then this should not be added to the group but instead added as a dependency. The most common one of these for most plugins is the main JQuery library as shown below. 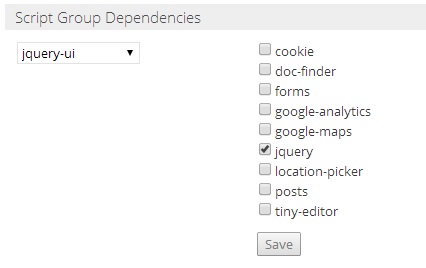 This article was last updated on 25 April 2018. Did you find it helpful?