Workflow allows you to set up and configure approval sequences between groups of administrators. This allows an administrator to set up a process such that a specific group of user can edit content but their changes are then passed to another group for inspection and approval prior to publish. Workflow handles both the sequence and levels of access at each configured stage and also handles the email communication to each user group to let them know there are actions waiting for their approval. Sitekit CMS's workflow system has been substantially reworked in 10.3 and workflow has been added to posts in 10.4

Sitekit CMS ships with a default workflow called Approved publishing. This page gives an overview of that workflow and how it can be used. There are also two specific help pages providing context sensitive help:

The general structure of work flow

Workflow currently only applies to pages and posts. Workflow is configured in actions via the following hierarchical structure:

This simple structure is deceptive. With it you can create extremely complex and interrelated n-tier processes between many different groups of administrators.

This example takes you through the default workflow implementation at each stage on the hierarchy and shows you the end result. The example is intended to step through the simple default edit - approval scheme.

The CMS ships with two pre-built schemes and defaults to the 'instant publishing' one which allows all user to save and publish to the site straightaway. Effectively this turns off work flow. In order to turn it on you should select 'approved publishing' as the scheme to use from the drop down and click apply to site.

By default, when the approved publishing system is set up all the roles/groups are set to 'anyone'. To get benefit from the system you need to add in the specific groups that are relevant to your own processes and approval hierarchy. In the table below you can see that we've made the local 'publishers' administration group the relevant role for the published stage. Roles and groups occur in two locations in workflow configuration:

As you can see everyone has access to the editing, publishing and deleting stages but only members of the publishers group can perform the publish itself. Drilling down to the relevant actions, you can see the following for the action relating to 'publishing':

The specific actions are then used to create the buttons at the top of the page edit scheme:

The final result is a process as outlined below:

1. Editor A logs into admin - as the general administrator they belong to the 'anyone' group.

2. The editor then creates a page as usual and when satisfied with it they click on 'save' then 'request publish'. NOTE save always needs to be clicked first in workflow, otherwise a 'do you want to discard unsaved changes' popup appears.

3. As seen from the actions table above clicking on 'request publish' changes the stage to the publishing one. The notify and email checkboxes are ticked which means that the administrators in the subsequent group (publishers) will get a new message in their task section under the edit menu, as shown below, and they'll also get an email notifying them of this. This will go to all administrators in the relevant group.

4. The publishing function is only available to administrators in the 'publishers' group. Users in that group will see the following:

5. These publisher administrators have two options based on the publisher actions, Publish and Cancel: 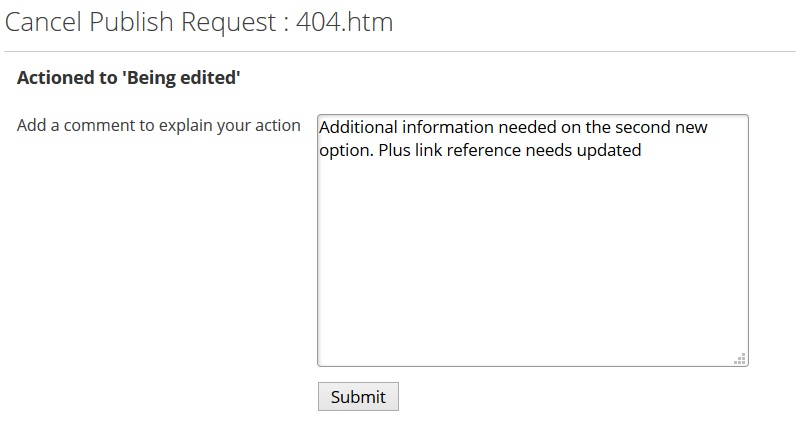 7. After submission of the above form the editor will receive a note in their tasks screen when they next login reminding them to make the additional changes:

Also if they reopen the page the publisher's note is displayed at the top of their editing screen:

In summary, a flow chart for the four default stages is below:

This article was last updated on 04 October 2018. Did you find it helpful?